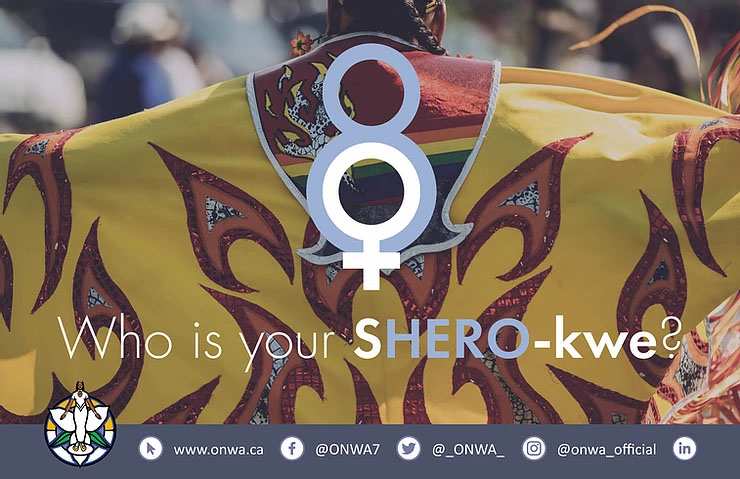 Thunder Bay, ON – Today, on UN International Women’s Day, the Ontario Native Women’s Association (ONWA) honours and celebrates strong, resilient Indigenous women. On this day, we share, highlight, and celebrate the lives, stories, and achievements of Indigenous women. This year, ONWA reached out to community in search of the SHERO-kwe stories of the heroic Indigenous women all around us.

“SHERO-kwe” comes from the combination of the words: “shero”, which is a woman who is defined by another as a hero, and “-kwe”, which is an Ojibwe term for someone who identifies as a woman.

Participants in this unique initiative were asked “Who is your SHERO-kwe? Who are the women that have made a difference in your family, community or nation? What makes her strong? Is she a great cook, artisan, knowledge carrier? Is she a community helper or leader?” Recognizing the SHERO-kwe’s in our lives celebrates grandmothers, mothers, daughters, sisters, and aunties; it honours the space they have made for us and the future leaders of tomorrow. No one’s voice or task is too small to be a SHERO-kwe.

ONWA was built on a foundation of SHERO-kwe’s such as ONWA’s co-founder Jeannette Corbiere-Lavell. She is a testament to Indigenous women that continue to demand their rightful place at the governance table.

“My SHERO-kwe is my mother Jeannette Corbiere-Lavell. As a child I thought everybody’s mom went to the supreme court and led protests against the government in between baking pies and running the farm all on her own. She really is my hero not just because she gave me voice and taught me how to stand up against injustice. She gave voice to generations of Indigenous women and their children and grandchildren who otherwise would have been excluded from our nations if she hadn’t spoken up.” shared Dawn Lavell Harvard, ONWA Board President.

Indigenous women experience many hardships. They have survived the intergenerational trauma of residential schools, the sixties scoop, over 500 years of colonization, systemic racism in the judicial system, all leaving generations of children denied the safety and love of family. Behind the stereotypical headlines there are SHERO-kwe lives, stories, and achievements that need to be shared.

As ONWA celebrates 50 years as an organization, we reflect on the SHERO-kwes that fueled a provincial and national trajectory of growth and influence supporting Indigenous women and families. We are proud to acknowledge the commitment of our SHERO-kwe employees that continue to do this work. We are honoured to recognize the SHERO-kwes everywhere who continue their work on the frontlines and in communities.

Today, on UN International Women’s Day, we wrap up ONWA’s “Who is your SHERO-kwe?” promotion. Throughout the day, ONWA will be sharing some of the SHERO-kwe stories from our community of the heroic Indigenous women all around us. Reflecting their memories, hopes and dreams.

C-51 is really about corporate greed for our land, water and resources