TORONTO, ONTARIO–(March 5, 2014) – The Prospectors & Developers Association of Canada (PDAC) is pleased to announce that its annual convention has surpassed 25,000 delegates for the fourth consecutive year. An enthusiastic crowd of 25,122 investors, analysts, mining executives, geologists, government officials, students and international delegations confirmed that the PDAC Convention remains the world’s premier event for the mineral industry. “We are thrilled with the turnout,” says new President Rodney Thomas. “The mood was very optimistic amongst attendees.” 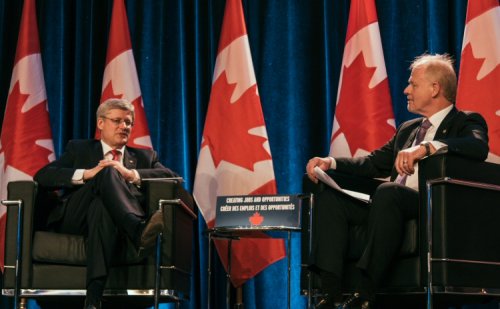 Highlights from the PDAC 2014 Convention include a visit from the Canadian Prime Minister, The Right Honourable Stephen Harper. The Prime Minister and 49 federal parliamentarians attended to lend their support for the mineral industry. “The PDAC Convention has emerged as a critical venue for public policy discussions that our sector needs to have in order to be successful,” says Ross Gallinger, PDAC Executive Director.

In addition, PDAC hosted 20 international mines ministers, a new record number. “We have seen tremendous growth and interest from senior levels of government from around the world,” says Gallinger. “This is a testament to the opportunity that the PDAC Convention provides for learning, networking and exposure.” PDAC welcomed Peruvian Vice President, Ms. Marisol Espinoza, who toured the convention and took in a series of bilateral meetings. Peru also became the first ever country sponsor, a unique opportunity to highlight the country’s interests in mineral exploration and development.

Now in its 82nd year, the PDAC Convention is more diverse than ever before. A number of events, including the CSR Event Series, Aboriginal Program and Investors Exchange garnered overwhelming support from the general public, reflecting the dynamic nature of our industry.

The Prospectors & Developers Association of Canada (PDAC) is a national association representing the mineral exploration and development industry with over 10,000 individual and corporate members. The PDAC Convention-the mineral industry’s largest annual event-took place March 2 – 5, 2014, at the Metro Toronto Convention Centre.

C-51 is really about corporate greed for our land, water and resources